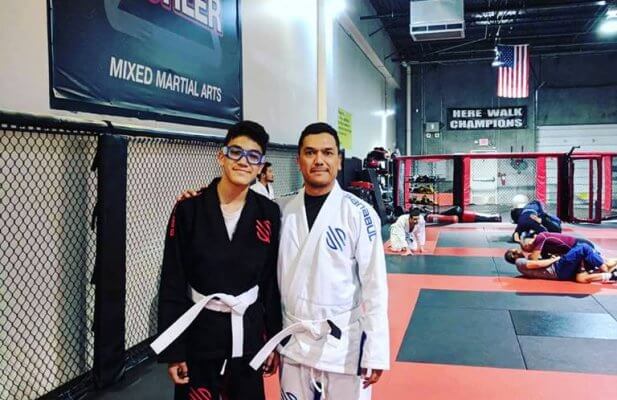 During the hype of Mixed Martial Arts (MMA) fights, I began hearing about a martial art form called jiu-jitsu. There was some kind of relationship with Brazil but to me, it sounded like it was from Asia. I thought it was just odd to associate it with a Latin American country. But at this point, I had no interest in learning any style of martial arts.

Working to Get Back in shape

The start of my journey began a year and a half ago. I made the decision to lose some weight and get some exercise back into my life. I was living the ‘married with kids’ kind of life. I had a job that kept me stationary and I did not exercise at home. I found a significant fitness program, Jeanetix Fitness, which is based out of Richardson, Texas. I began a diet program and exercising five days a week.

During this time, I was consistent with my training! Jeanetix Fitness transformed my fluffy body to a trim cut muscular body. The changes were not only with my body but my energy and endurance were increasing!  It was not easy but I kept going.

My Introduction To Brazilian Jiu-Jitsu

This summer one of my youngest brothers began to tell me all about Brazilian Jiu-Jitsu (BJJ). He was trying to convince me to join a class with him. The first thing that pops into my mind was NOPE! I thought “I’ll break this old Mumm-Ra body”. For those youngsters that do not know who he is, he is an evil sorcerer in the ThunderCats franchise.

After a couple weeks of insisting, I reluctantly told my brother yes. I really did not want to but I did want to support my brother. He found Mohler MMA academy where Professor Allen Mohler teaches Brazilian Jiu-Jitsu. My brother was the first to join. After my kids got out of school, I became a martial arts student.

What Did I Get Myself Into?

The first time walking into the dojo I did not know what to expect. The class started. I know the idea of contact is not something that comes easy for some, but for me I was okay. So I thought. My unhealthy-self began to think I need to prove myself to the others. I told myself to chill out. I then began observing and absorbing every single move.

It looks simple. I realize that it is not. I was having feelings similar to when you learn a musical instrument. The muscle memory and connection from your hands or feet to your brain is so foreign. The teacher slowly shows a technique, repeating it again and again while providing clear instructions. Now it’s your turn to practice with your partner. What it looks so simple is really hard. My first beginner’s class was how to escape from a side control and full mount. My partner was an 18-year-old kid was tossing me like a rag doll. I remember laughing. I couldn’t believe that this kid just did that with little effort. I was hooked.

Do You Want To Roll?

I did every class possible for about two months. The assistant of the professor, an advanced blue belt, asked me if I wanted to roll. By this time I knew what he meant, but I didn’t understand the full aspect. So I asked him, “What is rolling all about?” He replies escapes and submissions against your opponent.

When I said, I didn’t understand the full concept of rolling, he just began rolling with me and letting me do some techniques. I went all the way as my life depended on it. After a while, he would submit me like something magical. I didn’t know how I ended up in that submission. He would stop and explain to me “I was able to submit you with this technique because you did this”. He would then tell me what I needed to do to avoid that submission. Later I learned that my behavior had a name is the spazzy white belt.

He would say, “Don’t be a spazzy white belt, enjoy the roll, breath and take it easy”

This is a contact sport. It is almost unavoidable to think you won’t get hurt. The downside for me is that I’m in my 40s, healing won’t come as fast as when you were in your 20s. My first injury was a bruised rib from an elbow. The next month I sprained three of my toes. My fingers began to hurt after gripping like a gorilla. Injuries are just the nature of the sport.

Peers will tell me to take it easy, this is not a tournament. I learn fast but if I wanted to roll hard, a higher belt would usually submit me quickly. Sometimes I would feel that no matter what I did I would still lose.

One of the first things you are going to hurt is your ego. You become vulnerable when you lose. I have heard it more than once, “Leave your ego at the door” this way no one gets hurt. Everyone understands this. I began to realize I didn’t have to win.  Losing is winning if you are learning from it. All you need is the right attitude!

If you are considering joining a BJJ class, I encourage you to do so. The feeling of accomplishment when you are in trouble and getting out is great. Consider this:

Maybe this is not a lot that I can share. I’m still discovering this world. Instructors took me under their wing to avoid common mistakes. I will learn from them and enjoy it to the fullest!

When your first starting out in Brazilian Jiu-Jitsu, it can be overwhelming. There are so many new techniques and ideas to learn that you don’t alway...